Where America goes for Suzuki OEM Parts and Accessories 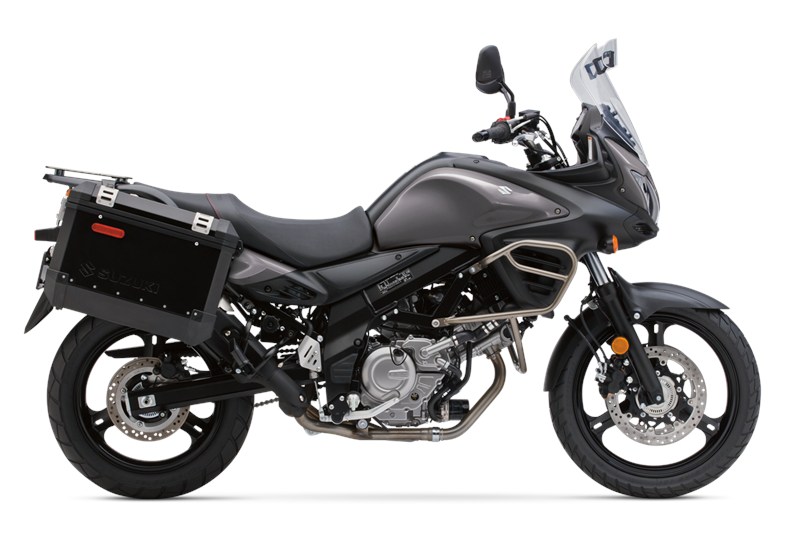 In 2002, Suzuki introduced the V-Strom 1000 in a new motorcycle category, the Sport Enduro Tourer. Its running performance and packaging earned worldwide acclaim. In 2003, Suzuki released the V-Strom 650 targeting a wider range of users. This versatile model covers not only daily use such as commuting, but also weekend touring as well. With the addition of an ABS-equipped model in 2006, the V-Strom 650 has always been the best-selling model in its class. To further improve its running performance and riding comfort, Suzuki decided to develop a new model.

For 2012, we're giving you another choice in adventure touring. Introducing the V-Strom 650 ABS Adventure. It has striking accessories that include sleek aluminum side cases large enough to fit a full-coverage helmet, a rugged accessory engine bar and an adjustable windscreen. It also has the same improved performance as the original V-Strom 650 ABS. Its new 645cc V-Twin engine has improved low-to-mid rpm performance, matched by enhanced fuel economy and environmental performance.

2012 will mark the 10th anniversary of the V-Strom series since its introduction. Suzuki hopes the new V-Strom 650 ABS Adventure will be enjoyed by many more riders.

All inventory listed is subject to availability and prior sale. Manufacturer's Suggested Retail Price (MSRP) if shown for a vehicle excludes set-up, freight, taxes, title, licensing or other dealer charges, and is subject to change. Individual prices may vary. Please request a quote for specific pricing.

email to: fulfillment@powersportspartsbarn.com
Please contact our Webmaster with questions or commments.

Copyright suzukipart.com. All rights reserved. No part of this website can be reproduced without written consent of the owner.

Where America goes for Suzuki Motorcycle OEM Parts and accessories

Where America goes for Suzuki Motorcycle. We have them all. Check out our on-line parts. On-line fiche finders simplify finding the correct OEM Parts with on-line ordering which can be done directly from the parts diagrams. We’ve Got them all , We can help you get a new Suzuki Exhaust, Suzuki seat, perform Suzuki performance increases, or even an new Suzuki carb.

Suzuki Motorcycle and Suzuki ATV OEM Parts
suzukipart.com OEM Suzuki parts and Accessories up to 40% off MSRP. Quick Shipping and a large inventory, this is where America goes for all its Suzuki OEM Parts. Brought to you for over 12 years by Suzuki leading online authorized OEM Parts supplier.